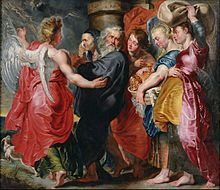 We are told a story of the simple−heartedness of an Italian monk, which does him honor. This good man preaching one day felt obliged to announce to his auditory that, thanks to Heaven, he had at last discovered a sure means of rendering all men happy. “The devil,” said he, “tempts men but to have them as comrades of his misery in hell

Let us address ourselves, then, to the Pope, who possesses the keys of paradise and of hell; let us ask him to beseech God, at the head of the whole Church, to reconcile Himself with the devil; to take him back into His favor; to re−establish him in His first
rank. This can not fail to put an end to his sinister projects against mankind.” The good monk did not see, perhaps, that the devil is at least fully as useful as God to the ministers of religion. These reap too many benefits from their differences to lend themselves willingly to a reconciliation between the two enemies ties, upon whose contests their existence and their revenues depend. If men would cease to be tempted and to sin, the ministry of priests would become useless to them.

Manicheism is evidently the support of all religions; but unfortunately the devil, being invented to remove all suspicion of malice from Divinity, proves to us at every moment the powerlessness or the awkwardness of his celestial Adversary.

ABSURDITY OF THE THEOLOGICAL FABLES UPON ORIGINAL SIN AND UPON SATAN:

Why did God permit him to sin, and his nature to become corrupt? Why did God allow him to be seduced, knowing well that he would be too weak to resist the tempter? Why did God create a Satan, a malicious spirit, a tempter? Why did not God, who was so desirous of doing good to mankind, why did He not annihilate, once for all, so many evil genii whose nature rendered them enemies of our happiness?

Or rather, why did God create evil spirits, whose victories and terrible influences upon the human race He must have foreseen? Finally, by what fatality, in all the religions of the world, has the evil principle such a marked advantage over the good principle or over Divinity?

2 thoughts on “Devil was invented as was God”